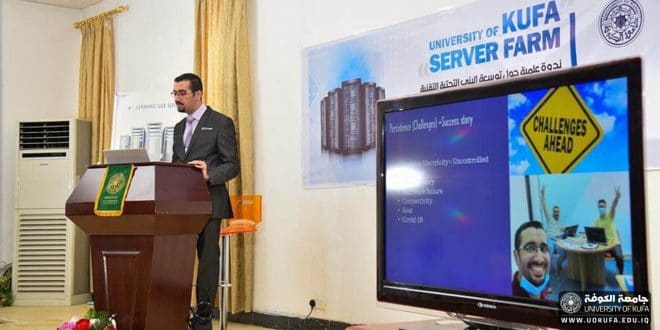 A scientific symposium at the University of Kufa about server farm

The information technology research and development center held a scientific symposium entitled “University of Kufa Server Farm”
The scientific symposium was opened by the President of the University, prof. Dr. Yasir Lafta Hassoun, with a speech in which he congratulated the university for this achievement at the level of Iraqi universities.
Director of the Information technology research and development center Dr. Ammar Jallawi Mahmoud gave a lecture entitled “Technical Infrastructure and Expansion by Creating a Server Farm System”.
Jallawi, spoke of the development in the technical infrastructure at the university, especially the progress that took place in the establishment of the server farm, which is the largest at the level of Iraqi universities,
also reviewed the expansion of a number of network servers in general and the e-learning system adopted at the university since 2010 Moodle, as well as the numbers and statistics, and for five years (2016-2020) the number of users of the electronic system Moodle, the volume of educational materials, the number of educational courses, a bank Questions, and the number of online tests for students for the 2019-2020 academic year.
Server Farm is the largest server at the level of Iraqi universities, as its size reached fourteen servers, the purpose of which is to meet the university needs during the electronic exam period.

A workshop on accredited lab standards